The English translation would be ball-and-stick or cup-and-ball and it refers to a traditional toy composed of a ball with a hole attached to a stick, which aims to make the stick enter the ball with the movement of the hand and the arm. The sexual reference is evident, and from the 19th century, the term was used to indicate the bottom in homosexual intercourse. In Alfred Delvau’s “Dictionnaire de la langue verte” (dictionary of the green language), it is literally defined as “the man who is the toy of another.” Throughout the 20th century, the expression “jouer au bilboquet” (playing bilboquet) was also used to name gay intercourse (also heterosexual). Towards the end of the 70s, it resulted in the expression “bilboquet merdeux” (merdeux translated to English is shit),  which was used in the marginal environments to name the bottom homosexual who had some sexual illness. 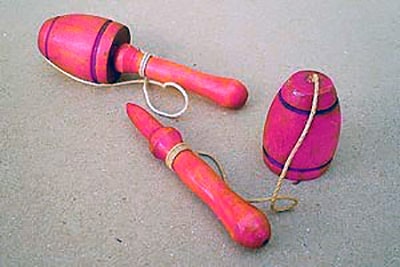 Put the stick in a hole …