Chochotte is an expression that at the present time and in its “gay” meaning we could translate as effeminate or faggot. However, it is a word with many different meanings and uses, which are sometimes related. As a consequence, this slang is one of the most complex expressions, and linguists can only speculate about its origin.

This slang is also the name of a bird, the common and vulgar name of the jackdaw. But above all, Chochotte is a first name for a woman, although that is how Mrs. Verdurin calls Professor Brichot in Proust’s “In Search of Lost Time” (1913-1927)

We can find many “Chochottes” in the 19th and early 20th century. “Chochotte” by Alexis Bouvier (1891) in the literary field, in theater, “Education de prince” by Maurice Donnay (1893), in music (light music) we have “Qui qu’a vu Chochotte?” By Spencer Emile (1888), “Elle A Mis Sa Redingote (Chochotte)” by Bertal-Maubon and Jean Lenoir (1925) and, of course, “Allons-y, Chochotte!” By Erick Satie “(1905). In the cinema field we find “Le Portrait de Chochotte” by the Pathé Brothers (1908), and even in the press of 1900 we can find a few “Chochottes”, in comic cartoons. These are incarnations of a very specific type of woman, about which we will talk about right away, and in which the name, with all its negative and mocking charge, does not seem chosen at random. 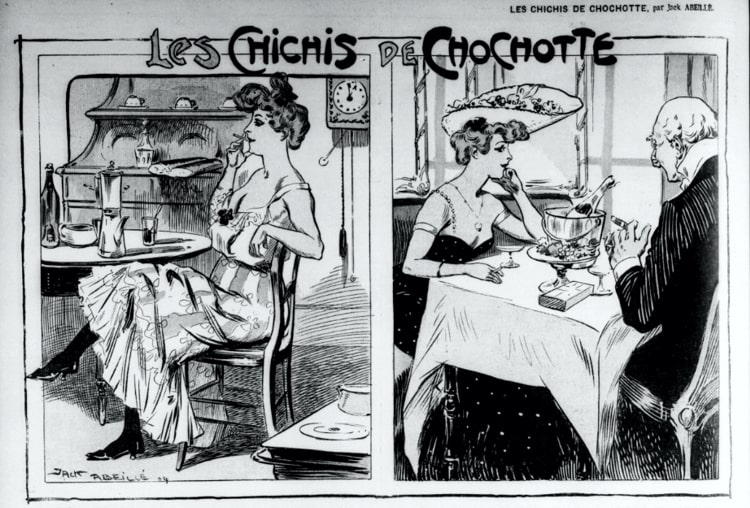 Cartoon published on October 9, 1904 in the newspaper Le Fin de siècle, where we can see the two faces of the woman.

A special mention must be made to the “Chochotte” of the story of Paul Alexis “The End of Lucie Pellegrin” (1874). A butch, lesbian, quarrelsome and violent transvestite, kept lover of the main character, which is a sketchy tomboy.

However, Chochotte as directly related to homosexuality is found for the first time in Aristide Bruant’s slang dictionary “L’argot au XXe siècle: Dictionnaire français-argot” (1901), in which it appears as slang for various French expressions and words. Affecter de la modestie (to force modesty, forced shyness, false modesty), Bégueule (fussy, prude), Efféminé (effeminate) and Pédéraste (pederast = faggot). Also, in the same book, we find the expression “faire sa chochotte” (make her chochotte) in the most feminine (and gay, of course) meaning of acting prude, of being an arrogant person who never finds anything to taste. A pretentious person that believes herself above all and every person. Therefore, a chochotte would be a woman who does “des chichis”, an expression that can be translated as having this kind of arrogant and pretentious attitude, lack of naturalness and simplicity. In this dictionary we see how the chochotte slang relates the stereotyped negative characteristics of women, with effeminate men and perverted faggots, a relationship that we find in many other expressions of other languages.

This French slang, therefore, is a very polysemic, and in our opinion, very “visual” term, as it represents a kind of stereotype of femininity and/or feminization which is not very positive, so as to say, and that it can also be used to talk about an affected or delicate person or thing in a “mocking” or “affectionate” way. It can also, especially in recent times, be used with the meaning of coward or weak and also with those of sissy and effeminate, although it is assumed that this meaning is increasingly in disuse.