In the Abc de la langue francaises, we find several definitions of Lope, and among these, the following, homosexual, bottom homosexual, effeminate, cowardly, and unmanly. This website dates its use with this sense since the end of the 19th century, as it appears in the Dictionnaire Historique des argots français by Gaston Esnault (1965).

It is easy for any French speaker to imagine that the origin of the term lope is none other than the abbreviation of the word salope, one of the oldest and best-known insults in the French language and that we already found at the beginning of the 17th century with the meaning of dirty, referring to the popular saying of being as dirty as a hoopoe, sales comme une huppe or in the Lorenese version sale comme une hoppe.

From the meaning of dirtiness in the physical, it would subsequently go to that of dirty in the moral sense (someone contemptible, traitorous and unscrupulous), and/or in sexuality, especially applied to females (shameless, perverse, adulterous). From Salope for this type of woman and man to Lope as an insult to male homosexuals, there was only a small step, or in this case, a small abbreviation. This etymological origin, let’s say, so simple and clear, is what Jean Lacassagne and Pierre Devaux establish in their work L’Argot du milieu (1948). 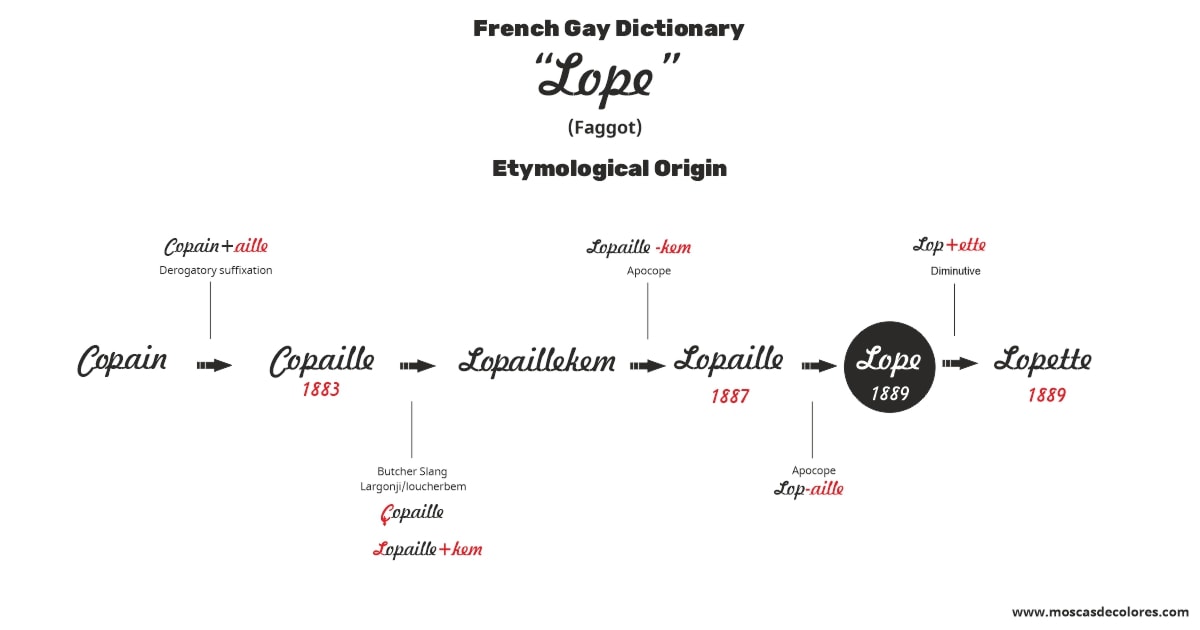 In this illustration, we see all the transformations until we reach Lope.

However, in the Dictionnaire Historique des argots français mentioned before, published almost two decades later, it points to another etymology of the expression that seems to have greater acceptance from an academic point of view. According to it, we found the origin of the term lope in the voice copain, which means friend, to which at the end of the 19th century added the pejorative suffix -aille forming the word copaille, with the meaning of friend of a homosexual or homosexual himself, around 1883.

This derogatory copaille will later become the word lopaillekem, with the magic of the jargon and cryptolalia of the butcher’s guilds of Paris and Lyon (the slang known as loucherbem). This would be transformed by successive shortening (apocopes) first in lopaille, and finally, in the lope that concerns us. The amazing process of creating an expression that we have just witnessed, however, does not end here and will take a final turn in the diminutive derivative lopette, which while maintaining its pejorative sense when applied to men, acquires a familiar and friendly tone in the lesbian scene of the late 19th century, according to the Abc de la langue francaises.