Tapette is one of the words that has survived the passage of time. It points to adult and bottom homosexuals from the mid-19th century to the present day, being its use very frequent nowadays as an insult. It also means fly swatter, mousetrap, slap, in sense of small punch, and it has even been popularly used with women as a synonym for chatterbox.

In fact, this last meaning, that of a chatterbox, gossip, etc., could be the origin of the relationship with homosexuals, since being chatty is a stereotyped characteristic associated with women, and we already know that according to stereotypes, homosexual men we are as women and therefore we share characteristics 🙂

However, we can not ignore that in ancient French Tapette comes from the verb Taper, which means hitting, beating and, above all, pushing in the sense of putting, penetrating, plugging, etc. Tapette gave the name to a stick used to push the plugs and covers, both in the context of the barrel maker, and the navy. And this meaning, that of inserting or plugging, has given rise to a whole series of expressions of sexual meaning and also related to prostitution, to the point that popularly Taper means having active sexual relations with another person, both with women and men. Se faire taper, means in this context to get fucked, and Taper someone means fuck him, so Tapette, could perfectly be bottom homosexual, the one who allows be Taper (fucked). Se taper una Tapette would be then, fuck a sissy .. or also hit her.

We, therefore, have two plausible origins of the term that are also complementary, so it is not unreasonable to think that it is precisely this double feminization of the homosexual man, as a gossip and sexual object, that has led to Tapette being one of the few insults that have managed to reach our days “on top form”, opposite to many other words that were lost over the past two centuries. 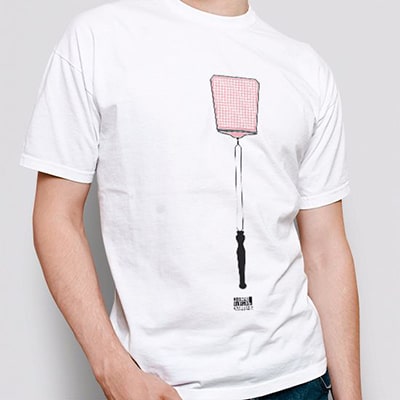 T-shirt with the Tapette drawing. You can purchase it in our online stores.