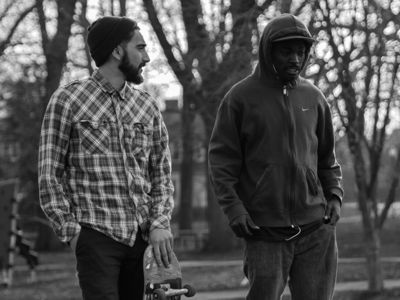 Some suggest that the term Bromance began to be used among skaters and surfers.
Photo: Bromance, by Todd F Niemand, used under CC BY-NC 2.0 / resized and optimized.

Bromance is the love that unites two, or sometimes more, straight men. It is said that this expression was coined in the 1990s by Dave Carnie, editor of the Skateboarding magazine Big Brother. It described the intimate friendship that sometimes linked two skaters who spent a lot of time together. This term, composed of the words brother and romance, began to enjoy popularity around 2005 with its emergence in cinema and television, making visible the changes occurring in Western masculinity, immersed in the metrosexual phenomenon. In this kind of relationship admiration, trust, and loyalty are absolute, and there are also hugs and loving expressions, but no theoretical attraction or sexual activity by definition, because at that time the g0y man also emerged, who starts his relationship with a bromance.

Read also: g0y, not gay (article in our blog)

And you? what do you think?

Tell us what you think, if you liked it or not, if there is an error or if you have lived some related experience. Your opinion and your information are very important. And the diffusion too!