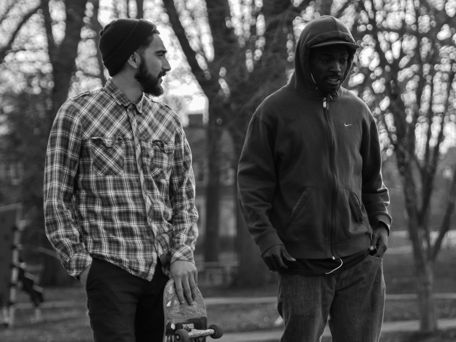 Some suggest that the g0y phenomenon arose in the groups of skaters and surfers.
Photo: Bromance, by Todd F Niemand, used with CC BY-NC 2.0 / resized and optimized.

Some years ago I read an article explaining briefly what g0y men were. Even though I thought homoerotic relationships between heterosexual boys were more common than it is supposed, it surprised me. Wow! This word remained a pending entry in our LGBT Glossary until now, when the time has come to devote the g0y issue with the development and greater depth it needs. In this post, you will find general information on the subject, classification within sexual diversity, ideas on which it is based, its main characteristics, and finally, my opinion concerning some quite controversial things that I have read. It is good to say that there may be g0ys that do not identify themselves or agree about everything you are going to read next.

The expression g0y (g-zero-y) appeared around 2005 in the United States to name the man who, regardless of his sexual orientation (homo, hetero, or bi), has erotic-affective relationships with men in which the anal sex is excluded. This extends to their wives, girlfriends, or female sexual partners. Zero with the anus. The g0y phenomenon has had a great development in Brazil, where we can find groups, bars, and private parties attended by couples and marriages, single men, and the occasional single woman. Judging by the photos, they are having a good time. It is like swinger encounters where males have contact with each other.

The classification of g0y

However, this taxonomy falls short to explain this phenomenon. We could characterize it as a kind of “paraphilical identification” because these people create a new identity from their sexual tastes (philias), which allows them to group, meet and claim themselves.

G0y would fit perfectly into androphilia, which is described, according to Wikipedia, the aesthetic, affective, and non-exclusive sexual attraction, towards the male. The desire and admiration for the aesthetically beautiful, good, and virtuous manly qualities, for men or masculinity; preserving its state of virility and maintaining a completely masculine behavior. 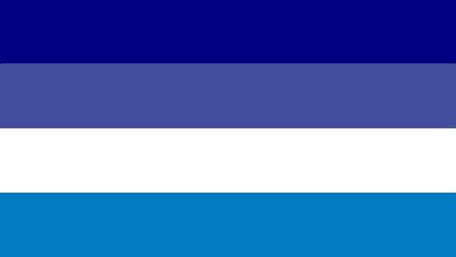 The g0ys also have their flag. It relates blue with masculinity.

G0y also has a strong identity aspect, at the level of Bears. The g0ys are a group, a collective, a social phenomenon that tends to be self-defined, which differs from gay people and, in general, from the LGBT + community with which they do not feel identified. I AM NOT gay, I AM g0y!

The g0y phenomenon could remain as a manifestation of the sexual flexibility of men. However, on the reference websites, we find a kind of “cultural aggregates” with which they claim their existence and the naturalness of their approaches.

The cultural aggregates of g0y

We understand as cultural aggregates all those ideas that exist before the emergence of the g0y phenomenon, which they incorporated in their identity ideals and that base their place in the world. Next, we will deal with those that seem important to us, without valuing their correction.

The g0y ideology is binary and exclusive, so masculinity is somewhat hermetic and not permeable to femininity. They appreciate the feminine but are separate from the masculine. Virility is an ideal, a value that must be scrupulously respected, and the area in which their erotic-affective relationships develop. They reject male effeminacy and believe that anal sex corrupts the manhood of both the penetrator and the receiver, who behaves in a feminine way as the receiver of the penis. The g0y understand the affective and sexual relationship with another man as a fraternal friendship between equals, so the top and bottom roles imply the destruction of this equality since gay intercourse establishes dominant and dominated roles.

All these chosen on-demand elements are specified in ideas, which sometimes become slogans, among which we highlight the following:

· Although g0y self-identify with the traditional labels, hetero, homo, and bi, they claim the overcoming of these, simply defining themselves as MEN.

· The homoerotic relationships of g0ys are not just sex, they go much further. Their relationship is named “bromance” (brother + romance), a fraternal and intimate bond, of trust and admiration, in which loyalty and fidelity are important values, and promiscuity is excluded. The goal is to live all your life with one partner, if possible.

· Sex arises naturally from trust and intimacy, which takes time.

· G0y is not a sexual orientation, but it is a masculine and natural behavior among men, which does not prevent sex with women.

· The anus is not a vagina.

· Marriage is between man and woman. Although there are homosexual men in the groups, their goal is not to find a partner or to marry, but it is a deep and intimate friendship, a space of trust and absolute loyalty in which there can be sex or not.

· The g0y must have a healthy lifestyle, exercise and, keep his body fit to get and keep a partner for life. You offer what you receive. Being healthy and being physically attractive is a reflection of male values, work, effort, perseverance, selflessness…

· Absolute rejection of femininity in a man. Transvestism, and female attitudes and behaviors are out.

· In some groups, homophobia is prohibited, however comments against what they call the “gay lifestyle” are very negative and stereotyped.

The g0y man is quite interesting as a sexually diverse phenomenon. On the one hand, it reveals a reality already pointed out by many studies on sex, that men have a plastic, flexible sexuality that dissolves homo-hetero labels. Another relevant point is the one that refers to masculinity since it shows that gender expression is a social construction, in which characteristics enter and leave according to the moment and place. For the g0ys, eroticism with a boy, within its norms, is a totally masculine and virile act. Equally interesting is the polyamorous side of the g0y since he loves his wife and also his buddy.

We have, therefore, a self-defined MAN, with a girlfriend or wife, who likes males, but who does not identify with the traditional categories of gay or bi, since they carry a series of characteristics for which he feels a deep rejection. These coincide with those socially attributed to homosexual men, effeminacy, anal sex, new family models, promiscuity, and disease transmission. This man is very clear about his role in society and what his obligations, work, and family are. Despite this, as it happened millennia ago, he aspires to have that “companion of arms” to take care of him and to care for, to tell him the greatest intimacies, in a masculine, loyal and faithful environment. A woman, a partner, without being excluded, cannot provide these things.

Thus we have a new label, a recent category of man, which serves g0y to identify, group, and search for themselves. The problem is that, as opposed to what happened and occurs yet with the other non-heteronormative sexualities, which are all of them under the LGBT + collective, the g0y distinguishes and differentiates himself by criticizing and rejecting the others using false and outdated arguments, which fully coincide with that of homophobia.

As the gay I am, I see a guy who wants to have sex with both sexes, and It’s perfect. A guy who dislikes anal intercourse either top or bottom, and it’s okay; a guy who is masculine, who likes masculinity and masculine boys, and this is good. A guy with a romantic vision of The classical Greece, who likes fraternity and camaraderie, who is interesting; who not only seeks sex, but a relationship of friendship at the same level as love, and if it could last a lifetime, and it is magnificent!; who likes healthy, fit men, fat-free, gym bodies, and I find this great! Hurray and double hurray for you! But you do not need to attack gays or encourage the negative vision that society has of us to get what you want. That will not help you get social acceptance or your place in the world.

The people who define themselves as gay, are men who feel an emotional and erotic inclination toward people of the same gender. End of story. Within this category, there is great variability of expressions, attitudes, and behaviors, all good and wonderful, among which we can choose the one we like the most in each moment. The LGBT + community defends and protects sexual diversity, and to do this, it does not need to criticize anyone’s sexuality or rely on traditional hoaxes and false ideas. The LGBT + collective values difference. Within the g0y associations, I remember the Mattachine Society, which defended the rights of homosexual men and women from heteronormative mimicry. They did not convince homophobic societies or the people involved.

G0ys men of the world, you want to claim different masculinity to be accepted in a society that is heteronormative and, therefore, will never accept you. For said society, you can end up being unfaithful cocksuckers to your wives. Or be the type of man to avoid, who begins massaging the thigh of his gym partner but ends up massaging the cock of others, usually after a night of partying and with some extra alcohol. All that ideology that you have created will not help you when you are the talk of the gym, the neighborhood, or the university, when you are the object of criticism and mockery from those who understand that different is not good. G0y man, call yourself what you want, but bear in mind that the fight for sexual diversity unites us all.

Everything we post on this blog is opinion articles, but we've classified them into these categories to highlight the relevant topic. What interests you the most?
42 original and fun designs to buy printed on t-shirts and other items. Claim each day or treat someone special with one of our Drawings & Histories. Which one do you like the most?
More than 2,200 entries in 68 languages make up the largest LGBT + dictionary on the web, with a glossary of sexuality terms explained for you to understand. Do not leave with doubt!
I Survived Sodom. Bollo. Lesbian Dictionary (Spain). Sapatão. Lesbian Dictionary (Brazil). Gousse. Lesbian Dictionary (France).
△
Mdc
MOSCAS DE COLORES
Contact · About us · FAQ · Cookies policy
Copyright © 2012–2022 @moscasdecolores · See you soon!