Maria Sapatão at night is João.

The day after launch Moscas de Colores, in late September 2012, we went to the wedding of our friends Loli and Enric. On the bus that took us countryside we comment the project with our friends; the idea we had in mind, objectives, about Palomo Cojo, Tortillera … and so, naturally, began to appear new words. From Manolo came Sapatão: “of Portuguese … Sapatão, which is, is…big shoe”. Why? What is its origin?

Sapatão illustration, you can purchase it printed on t-shirts and many products.

At that time we could not imagine the world in which we had just submerging and all things that we would discover hidden behind the words. Over time, we realized that the words were telling us how humanity had lived his sexual diversity with a level of detail as spectacular, as gravitational waves show events occurred million years ago.

And today it is time for the word Sapatão, which is related to that men have bigger feet than women, and this is an assumption, because after a slight search we do not found statistics linking sex, age and shoe size, but at least, for the topic at hand, what is important is that it is a popular knowledge or belief.

Everything indicates that Sapatão is a lesbian slang that appears in Brazil, and some say it has any connection with military boots and the process of independence of Brazil from Portugal because Sapatão was used to call disparagingly the Portuguese people. We have not found information to support this origin or to explain it, and this, plus the fact that the independence process occurred between 1821 and 1825, 150 years before the slang appeared, makes us think that the origin may be another and more related to what happened in the rest of the world.

The appearance of this Sapatão slang in the 70s may not be a coincidence, and may be related to the Tomboyism, appeared in North America in the early 20th century, with which it begins to break with the strict female code and the recovery of spaces reserved exclusively for men, moment when appears what after will be called the Butch and Femme gender expressions, one phenomenon which, incidentally, has no equivalent in men.

From here and gradually, women around the world begin to adopt an aesthetic and an attitude until the time masculine, and not just as a lesbian issue, but as part of the empowerment of women. The German Kesser Vater movement (the 30s), or the current and global Tomboy, are proof of this.

All out, the origin of the lesbian slang Sapatão, moves between reality and metonymy, reality made up of women wearing men’s clothing (pardon the label) by identity and/or vindictive issues, and popular metonymy calling lesbians with a masculine characteristic as having, on average, larger feet and therefore larger shoes.

Check out our Portuguese Lesbian Dictionary to know more words and interesting stories. 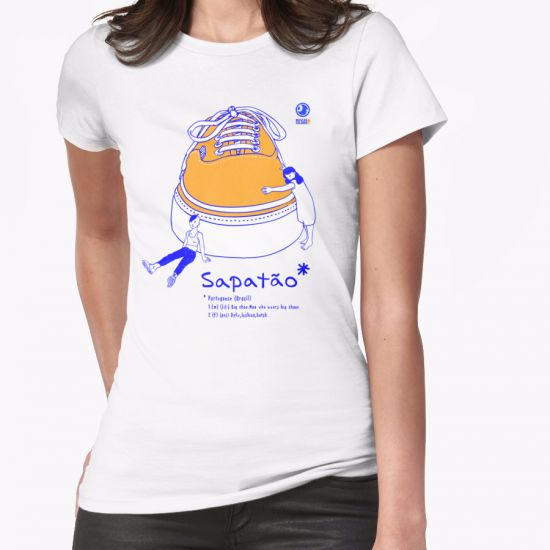 Everything changes and with this illustration we continue what we started with Tomboy, the words, our greatest inspiration, focus on the Sapatão design. Shyness of small slang is over. There are also changes in style illustration, more focused on the work of the line and stroke, in this case in cyan color that combines great with the orange. If you like, you can buy printed on a variety of products like t-shirts or posters, following the product link.