The time for persons has come.

The English term Tomboy, though usually related to lesbians and translated as young masculine lesbian, actually refers to a different characteristic of sexuality, which is gender expression. It has been used this way since the 16th century, when the first written reference appeared. 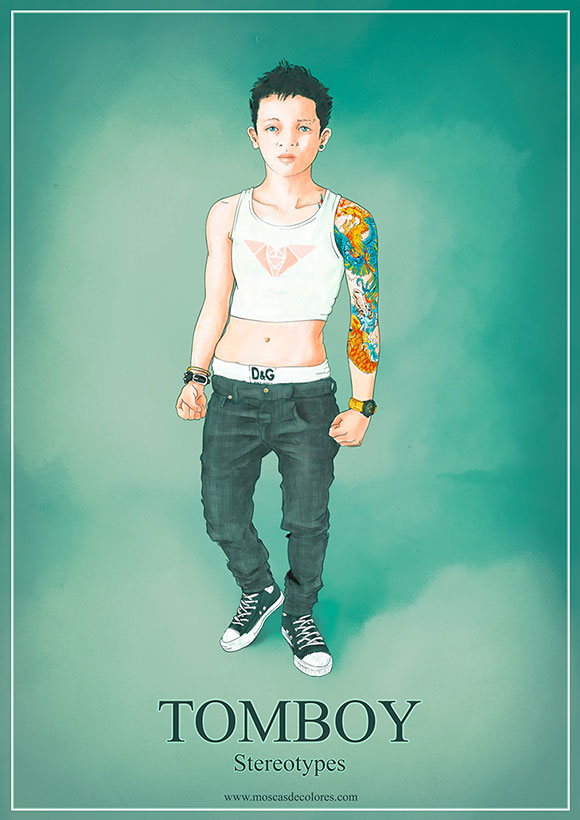 Tomboy illustration, you can purchase it printed on t-shirts and many products.

The origin of the word Tomboy.

The expression is composed of the terms Tom + boy. The first part, Tom-, works as reinforcement of masculinity, since the word Tom was used from the end of the 14th century as a generic nickname for men and to refer to masculine issues. The following, -boy, has the function of indicating the age range, which corresponds to childhood or youth. So, Tomboy began to be used to categorize especially tough and masculine boys (1550). Starting from this first meaning, the semantic leap took place and it began to be used to refer to girls who preferred boy activities, appearance and attitude, to those allegedly belonging to the feminine gender (1590). 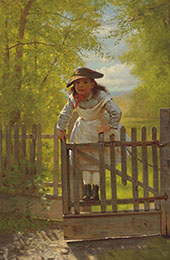 At that time, women had to fulfill a strict code of conduct rules which limited their existence. That is why the mere fact that a little girl would climb a wooden fence, made her deserve the label “Tomboy”, as we can see in the painting of John George Brown of 1873 titled “The Tomboy”.

Ever since its beginning, the expression Tomboy has maintained its gender vigilance function. This is, controlling that the gender expression of girls remained feminine, regardless of what was considered feminine or masculine at that moment. This Tomboy label generated an image, an idea, a stereotype that changed over time. Thus, with each eternal feminine, a stereotype of what is not a girl is created, adding and removing features to the Tomboy label according to the time.

In the United States of the 19th century, the panorama began to change by the emergence of the necessity to lead a healthy lifestyle. This notion was inconsistent with the behavior that good girls of that time had to exhibit. Even though physical exercise was reserved for men, sport began to be considered necessary to improve the health of women. As a result, comfortable clothes for women were needed, and those clothes – lust! – left the body of women uncovered.

Thus, the healthy tomboyism began its social fit, and with this recommended physical exercise and the emergence of human rights, doors to other spheres of life (exclusively masculine until then) were opened, such as a non-reproductive sexuality.

It seems incredible, but that is the way it was, the only sexual function of women was reproductive. Although lesbian sexual practices were known, especially oriented to the enjoyment of men, it was not conceived that a girl could feel erotically-affectively inclined to another. This was not due to same sex fact, but because the only function of women’s sexuality was that of having offspring. This explains the lack of words to name lesbians in the English language before the 1920s and marks the time horizon in which the word Tomboy, referring to gender expression, began to be used to talk about the homosexual orientation of females, this is, lesbianism. Tomboy began to be used to name homosexual women when their existence could be conceived.

This association with lesbians was linked to the simplistic argument “if she does boy things, perhaps she is a lesbian”. In this way, Tomboy became a stereotype, a negative reference, acceptable during childhood, but to be avoided in adolescence and youth. Because it is in these times of life when sexual relations start, repression and punishment by the environment were to be expected.

Tomboy. From stereotype to reality.

But the sin of social repression carries its own punishment, because from this undesirable stereotype for sanctimonious society, a new identity, Tomboy girls, has been created. Too bad! Tough life!, life is unfair! If what society wanted was girls to be feminine, what we got is the stereotype of “masculine” “women” generating trend and popularity worldwide, thus increasing sexual diversity with a new universe of Tom identities, which use and pulverize gender roles. These Tom identities are basically the following:

Girl Tomboy: dresses like a girl, performs boy activities and behaves like a boy. A clear example of this type is the famous archaeologist Lara Croft , from the Tomb Rider videogames and movies. (Should we say Tom Rider? 🙂

Girly Tomboy: dresses like a boy, looks like a boy and behaves like a girl. An example of this type could be the actress Ellen Page in any of her public appearances

Boy Tomboy: dresses like a boy, behaves like a boy and does boy things. This type is usually called Tomboy. Examples of this type could be the Swedish model Erika Linder and Thai Toms.

This typology indicates, like everything related to sexuality, that gender expression is a matter of degree and that it can also vary over time. Although being categories, they do not work the same as the traditional, fixed and excluding ones, but the opposite, they are fluid.

In almost five centuries, beginning from an insult that sought to separate men and women in watertight, defined and excluding compartments whilst creating stereotypes and referents that needed to be avoided, we have now moved to a new Tomboy identity in which everything is more fluid and gradual. A cocktail made with a plastic sexuality that generates diversity, human rights that allow its expression, the legitimate demands of women and their sexual revolution, and an unparalleled capacity for communication in our history that reduces loneliness and allows the diffusion of trends.

Thus, the Tomboy phenomenon currently has a great importance because it shows that the boundaries between masculine and feminine are not determined (see also the metrosexual and its antidote the hipster), not only by fad questions. In a world where sexual flexibility is on the rise, a Tomboy girl like the one we illustrate today, can be attractive not only to lesbians and straight guys but also to gays and heterosexual girls. The amputation of self-definition is over, the time for persons has come. 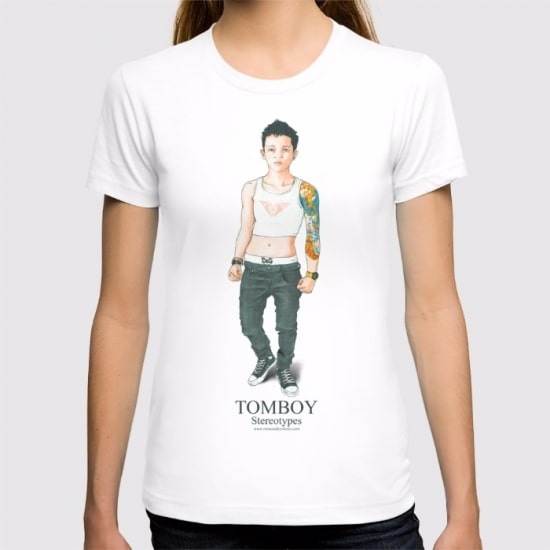 The illustration on the word Tomboy focuses on the figure of the protagonist, a girl with a masculine look who has her fists closed expressing strength, but also anger at having to live in a world in which certain skills and abilities have been assigned to men to the detriment of women. She is wearing a top with the drawing we made on the word Lepakko, but pretty blurred, showing the shadow of suspicion that has always accompanied girls who have resisted to follow the strict female code.