The queen of the queer Universe.

Tortillera is one of the most used slang words in Spain and Latin America to name homosexual women. Its origin may be one of the oldest and most controversial, especially since Tortillera is a word that has traveled from one side of the Atlantic to the other, keeping its slang meaning and blurring its origin and history. 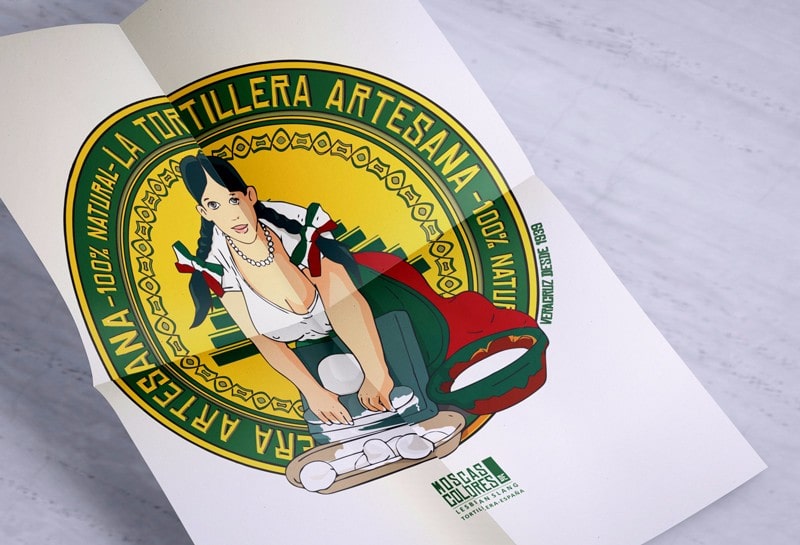 Tortillera illustration, you can purchase it printed on t-shirts and many products.

The false origins of Tortillera

We have found many pages on the web and some printed texts where its origin is explained, but they are mostly erroneous.

One of the most habitual explanations establishes the origin in a novel by the Cuban writer Severo Sarduy, published in 1978, in which a woman, named Iluminada, made a Chinese tortilla (Chinese omelet). This gastronomic fact, the making of the fu-yong omelet, which is made without eggs, has been the basis for some people to establish yokel parallelism of sex without the participation of male testicles, and based on this antiquated idea, “the false sex”. This explanation has been repeated and repeated in the networks to infinity when the truth is that in Maitreya the word tortillera does not appear. And if the word does not appear it can not logically be the origin. And even if it appeared it wouldn’t matter! since the first reference of the word tortillera as lesbian slang term dates from 1830, in the Spanish-French Dictionary of M. Nuñez de Taboada, where the French word “Tribade” is translated as Tortillera.

Another explanation comes from the popular imagery when thinking about lesbian sex and the noise that should supposedly be heard when two women are scissoring, and that it is thought similar to what is heard when the ingredients of the corn tortitas (pancakes) are amassed – plas-plas-plas -, a jocose idea as well as pornographic hard sex in a macho way.

This idea we discard because the most characteristic sound of lesbian sex is not patting, it is moaning. The video in which Jesusa Rodríguez exposes the true origin of the word tortillera for her explains very well the discarding of patting since, as lesbian, she was in charge of carrying out the pertinent field study 😉

According to Jesusa Rodríguez the origin of Tortillera is in the Spanish saying “a falta de pan, buenas son tortas” (literally translated as “in the absence of bread, cakes are good”, which is similar to the English saying “half a loaf is better than none”), understanding that when the penis is missing, the tortilleras are good. However, not only does this Spanish saying have another meaning, but also the first written reference to this saying dates from 1891, and as we have said before, the first written reference of the Tortillera slang term dates from 1830.

We also found the explanation offered as most likely to be by Felix Rodriguez in his Gay-Lesbian Dictionary. It relates the way to make corn tortitas or Spanish tortilla with lesbian sex. This is because according to its Mexican source, it resembles the moment when women change positions one on top of the other, round and round, affirming that lesbians perform 69 and not the “orthodox” missionary position. It also adds that it is a hot meal that is related to the heat of sexual passion. To refute this idea, we are not going to focus on the limited vision that this idea shows of lesbian sex, which would in itself be enough, nor on the Spanish origin of this slang term (as we will see below). We are going to focus on the fact of the dating of the first written reference, 1830, which takes back the use of this slang term at an oral level at least to the 18th century, and at that time slang, in general, did not usually make explicit references to sexual practices.

Other minor and perhaps more convoluted explanations are those that establish the origin of the tortillera slang word through an etymological analysis that reaches the bun because of the shape of the vulva, and even the placenta, but the origin of slang is usually popular and not academic at all.

The Spanish origin of Tortillera

In order to know the origin of this lesbian slang word it is necessary to know where it was originated, and one of the key elements is the text by Adolfo Sánchez Vázquez in which he narrates the arrival of Spanish exiles to Mexico due to the civil war, surprised to see a welcome banner signed by the tortilleras union. We located the origin in Spain and its arrival in Latin America at the beginning of the 20th century because at that time in Mexico a tortillera was a woman who made corn pancakes while in Spain it was a lesbian woman.

It is quite unlikely that a union would be called in such a way having also the meaning of lesbian. For this reason, we also think that it is quite probable that after the arrival of the Tortillera slang term to Latin America, it could have given rise to other slang expressions such as Arepera and Cachapera, which, in addition to referring to the woman who makes and sells Arepas or Cachapas (corn pancakes in Colombia, Puerto Rico and Venezuela), are slang for a homosexual woman too.

The origin of Tortillera

In our opinion, the origin of this slang expression has nothing to do with anything related to the elaborations of bread, buns, cakes, pancakes or tortillas, but it is related to the concept of “twisted”.

The most probable origin of the word tortillera is the word torticera, a word derived from the Latin tortus, with the meaning of twisted, one-eyed, etc., as the French term “tortille” which means twisted. Torticera would be a cultured word that through a process of “popular etymology” would be erroneously pronounced as a tortillera, or even the word tortillera could be used as an understatement or euphemism to avoid saying what someone really wants to say.

The social consideration of homosexuality as something twisted, deviant or ill-fated, that we find in so many words from different languages and times, could be behind the origin of this expression, as it happens with the English term “queer”, which means twisted and that comes from the German term “que” with the same meaning.

Thus, Tortillera constitutes an essential term in the explanation of homosexuality through the words, since it connects with one of the bases of homophobia, the conception of homosexuality as something twisted or deviant. It is also essential because it is a traveling term that crossed the Atlantic to have its own and distinct development, and also because it is the Hispanic version of the queer term.

You can expand the information with the Tortillera entry of our Spanish Lesbian Dictionary, and also see the word Tribada in the same dictionary.

Video (in the Spanish language) of Jesusa Rodríguez, previously talked about in the first paragraphs. 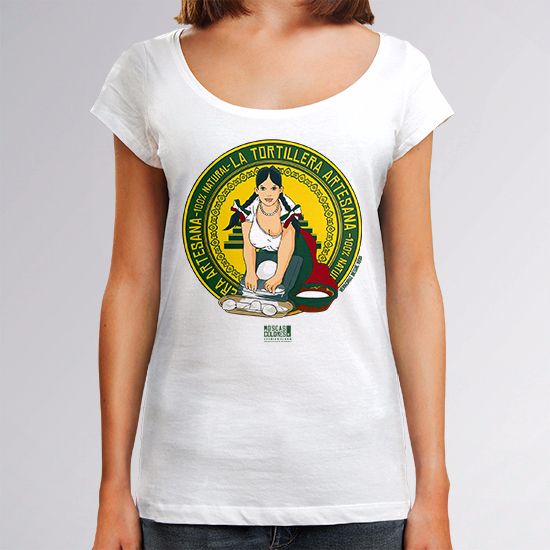 With this design, we wanted to strip the term tortillera of all negative nuances and place the word tortillera in its proper place. Our Tortillera illustration is a beautiful woman, one hundred percent natural, dressed in the colors of the Mexican flag, as if it was the logo of a brand of corn flour, a nice and cheerful drawing of which we have made two versions, that you can purchase printed on different items with dark or light color background. Treat yourself or surprise some special person with Tortillera, the Queen of the Queer Universe.