How to say lesbian in Valencian

Below are the words of our Valencian Lesbian Dictionary, which also contains the expressions used in Catalonia, and that we will be expanding in new editions.

To make this lesbian dictionary we have used the text of Ricart García Moya “Idioma valenciano, lesbianismo y machismo” (2016), the manuscript of Antoni Bulbena Tosell “Flora pornogràfica francesa: suplement al argot francès” (1921), and other texts and dictionaries of the network. If you know any more words, please, contact us. But first some information about the language and where it is spoken.

Valencian is a language of Indo-European family, spoken and official in the Valencian Community, in Spain, being part of linguistic diasystem of much of the territories of the former Crown of Aragon. 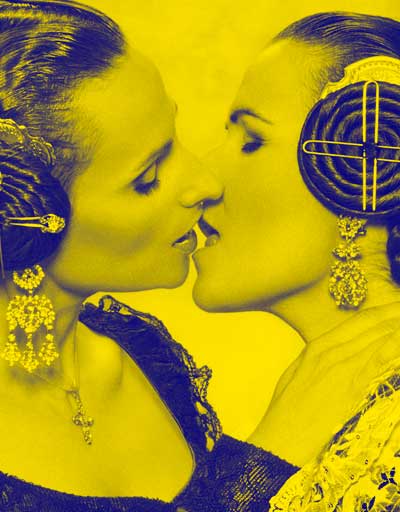 Fragment of the famous photograph of Quality Photo Studio for the cover number 8 of the digital magazine EGF AND THE CITY, colored in yellow and blue.

The first manifestation of LGBT pride was held in Valencia in 1979, organized by the Moviment d’Alliberament Sexual del País Valenciá (MASPV), which was attended by some 5,000 people. The following year the civil government did not approve the parade, this time called by the Moviment d’Alliberament Gay del Pais Valencià (MAGPV), which held a rally in the Plaza de la Virgen. Replacement of activism came by the hand of the Lambda Collective, founded in 1986, and performing demonstrations every 28 June until in 1992 took up the parade that comes to this day, estimating in 2019 the 30,000 participants.

Everything we post on this blog is opinion articles, but we've classified them into these categories to highlight the relevant topic. What interests you the most?
42 original and fun designs to buy printed on t-shirts and other items. Claim each day or treat someone special with one of our Drawings & Histories. Which one do you like the most?
More than 2,200 entries in 68 languages make up the largest LGBT + dictionary on the web, with a glossary of sexuality terms explained for you to understand. Do not leave with doubt!
God hates figs. Paragraph 175 (Germany). I Love Sodom. Tortillera. Lesbian Dictionary (Spain).
△
Mdc
MOSCAS DE COLORES
Contact · About us · FAQ · Cookies policy
Copyright © 2012–2022 @moscasdecolores · See you soon!
In order to provide you with the best online experience, this website uses cookies. By continuing to navigate, we understand that you accept its use.Ok