Tortillera is a derogatory term to name lesbians. Its literal meaning is a kitchen utensil used to make tortillas (omelets) or wear it to picnic and is also the woman who makes omelets or pancakes, depending on the country.

The first written reference of the word Tortillera as slang for lesbian dating from 1830, in the Spanish-French dictionary by M. Nuñez de Taboada, published in Madrid, in which the French word “Tribade” is translated as Tortillera and defined as “a woman who abuses another”. With this, it is demonstrated that the origin attributed to Maitreya, a novel by Cuban writer Severo Sarduy published in 1978, is wrong. Although the word tortillera as lesbian slang is more or less known wherever Spanish is spoken, the origin must be placed in Spain.

Another fact that could reinforce this idea is a text of Adolfo Sanchez Vazquez, which narrates the arrival to Mexico of Spanish exiled people by the Civil War, who was surprised to see a sign saying “El sindicato de Tortilleras les da la bienvenida” (The Tortilleras Union, gives you the welcome). Everything can be, but at the beginning, nobody would make a poster or a union with a word that was also derogatory slang of lesbian.

Some explain the origin of this slang with etymology, which brings us to the bun and even the placenta (look at that!!), but the thing is, forgive us Corominas, often slang words are not originated by etymology, but are created from jumps of phonetic resemblances, in order to avoid pronouncing what really meant, or also for mispronouncing one word or say one word for another.

Thus, the most likely origin could be in the term Torticera (something like tortious), a word derived from Latin tortus, with the meaning of crooked, twisted, etc. Torticera would be a cultured word, and by a process of popular etymology would be expressed wrongly as Tortillera, by their phonetic similarity. In this way, people said “she is Tortillera” instead of “she is Torticera”, by an error in pronunciation. The consideration of homosexual behavior as something twisted, deviant, will do the rest.

For all the above, Tortillera as slang for lesbian, would not have its origin in tortilla (omelet) or bollo (pancake), thus refuting all sexual and onomatopoeic explanations of this famous lesbian slang, but it belongs to the set of insults that have to do with the idea of ill-fated, deviant, inverted, twisted, etc. so common in the gay and lesbian slang of almost the entire planet such as, the famous English word Queer. 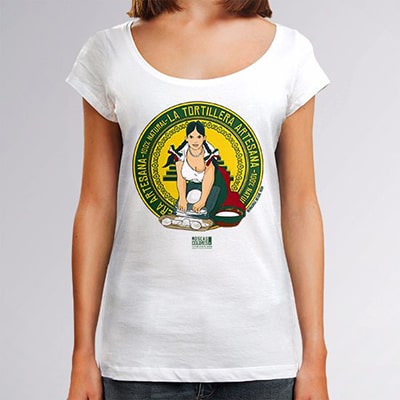 T-shirt with the Tortillera drawing. You can purchase it in our online stores.