Sodomita was, initially, the name given to the people living in Sodom, the mythical city of Palestine, that according to the Bible, was destroyed by the divine fire because of the lack of hospitality of its inhabitants. However, as we explained in our blog article “Word of God”, the word sodomita was changing it meaning with the successive and biased translations of the Bible.

The first reference of the word sodomita appears in 1254 on a text by Alfonso X entitled “Judizios de las estrellas” and also appears in some regional code of laws of the 14th century, by its condition of being an insult that must to be avoided, with its variations like “sodomético”, “sodómico”, “sodomista”, “sodomítico”, “sodomitoso”, “solomico” and “somético”.

Thus the DRAE, in 1739, defines sodomy as “concúbito between persons of the same sex or improper glass” and in 1854, “against the natural order.”

In the 19th century, the Napoleonic Code decriminalizes sodomy to understand it as a private but repulsive act, and this legal change has resulted in the inclusion in the DRAE in 1884 as a definition of sodomita “native of the city of Sodom; belonging to the city of Palestine”.

The last change in the DRAE about the meaning of sodomita has occurred recently, changing “committing sodomy” by “practicing sodomy”.

The word sodomita among of being used as an insult and religious and legal texts has been used too in medicine, natural sciences, and anthropology. Today it is virtually obsolete. 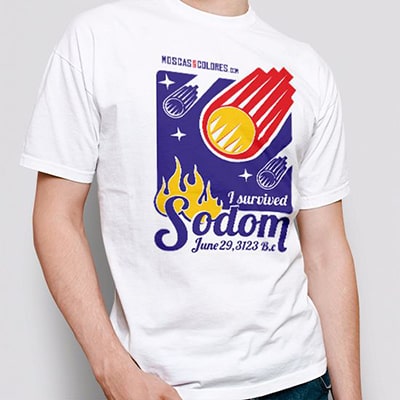 I Survived Sodom drawing printed on a t-shirt. You can purchase it in our online stores.

Read more: I Survived Sodom and I Love Sodom from Funny and Protest collections.

Read also: The word of god. Post from our blog.