I love Sodom, for our dear inhabitants of Sodom.

On 29 June. 3123 B.C. dawned like any other day in the fertile plain of the Jordan River. The people of Sodom and the neighboring cities Gomorrah, Admah, Zoar, and Zeboyim, initiated its activities on that summer day than anticipated splendid, despite the constant earthquakes that were happening for weeks.

I Love Sodom illustration, you can purchase it printed on t-shirts and many products.

The Sodomites, and their neighbors, although they did not know why, become accustomed to little earthquakes, produced by a fault line that passes over the Jordan River. Under the porous ground on which settled the cities, the result of the flora and fauna existent thousand years ago had been stored a large number of explosive materials such as natural gas, asphalt, and sulfur. Suddenly the birds began to fly, the flocks to show restless and little earthquakes gave way to an earthquake measuring over 6 on the Richter scale. The land sank and surfaced explosive materials and set fire to contact the household and, some say, with the fall of fragments of a meteorite that crashed into the Alps. Sodom and the other cities were completely destroyed and covered with a heavy residue of ash which can still find 5000 years later.

Lack of geologists at that time made people seek the causes of that destructive event in divine punishment for the customs of the sodomites and so began the legend. The punishment of god to the people of Sodom, as was the universal deluge to humanity, was part of the compendium of exemplary legends which subsequently led to the scriptures.

With I love Sodom we want to tell that the Sodomites and their neighbors from Gomorrah, in addition to suffering combustion and spray themselves and their cities, have been stigmatized by the simplistic interpretations and consecutive poor translations of the Bible. Currently the reading could be, god killed sodomites by faggots, as some think about HIV or the divine punishment of tsunamis caused by the existence of nude beaches, but in reality, the relationship of the Sodomites with homosexuality is only the fruit of the interpretations that the translators have made of the biblical texts. In fact not until the 11th century appears the word “sodomy” in the Liber Gommorrhianus Damianus of Benedictine monk Petrus Damianus, for which the word included all that sexual behavior not aimed at reproduction, not only sexual contact between men.

Sodom was not what they say, nor are the Sodomites. Change our minds.

I love Sodom, we Y Sodom, and you? 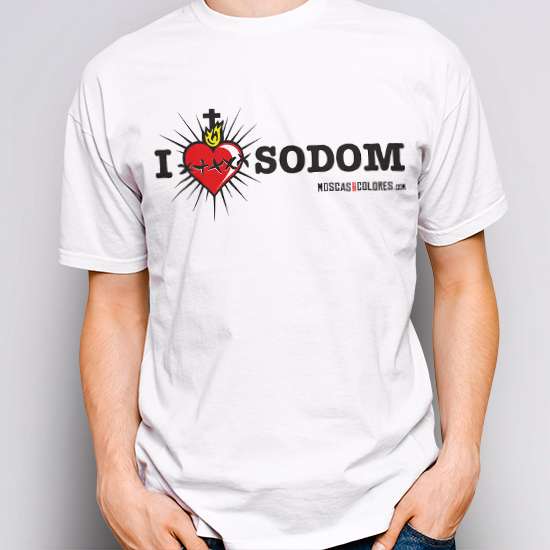 Did you know that until the 11th century a Sodomite was no more than an inhabitant of Sodom? And that the sodomy was any non-reproductive sexual behavior, then? With this pride clothing, we want to say that the word of god is really that of men and that in Sodom only occurred a geological catastrophe. I love Sodom. And you?