So far, the issue of sexual identity, gender identity, sexual diversity or whatever you want to call it, we had discussed in our blog with several articles on this interesting and controversial topic, but for some time we had in mind to develop one collection of illustrations that go beyond the sexual orientation of desire, beyond the gay and lesbian subject. When we started the preparations for the month of LGBTI Pride 2014, we thought the time had come, and we create Look inside Collection.

Look Inside illustrations, you can purchase them printed on t-shirts and many products.

With this new collection does not intend to explain conscientiously concepts have been created in recent years, but we try to approach and claim sexual diversity in a simple way and, if possible, funny.
In recent years we have searched a lot of information, we have read a lot and seen many documentaries, and gradually we started to have an intuitive view of what’s all the mess about human sexuality. And we have done a lot of questions and we have questioned our own sex, our own gender, our own sexual orientation, and our own sexual identity.

Who has decided and who determines what a man is and what is a woman? Who has decided and who determines what is a gay person? Why a woman can not have a cock and a man can not have a pussy? Why a person can not have both? Why a person must be a man or a woman and not a mixture of two?
We live in a world of categories, or better said,  through the categories, we know the world and talk about it. Until recently, the man category had a number of implicit characteristics: looked like a man, had a cock, liked women and expressed himself in a masculine way. Today we all know or should know that this is not so. The appearance of the man varies with the era, some women are born with a cock and there are women who like women. So we have created other categories that help us to experience reality with many more hues, although these categories not always define reality properly.

Perhaps Sex is the best-known category: have the male, who has a penis, testicles, and XY chromosomes. We have a female having vulva, vagina, ovaries and XX chromosomes. But we also have the intersex person who may have different combinations of the first two. Intersex people have had a hard life, and with them, parents and doctors, have committed many atrocities trying to move them to one of the above two categories and have also been mistreated by society. What a pity!

Sexual identity is what every person feels that is itself, there are men and women. A person does not feel one thing or the other by a decision. And also there are people who feel in both ways, the bigender people, or people feeling partially male or female, demigender, or that they feel neither man nor woman, the agender people, or that in a moment they feel one way and at another they feel another, that they are people with a fluid gender. In the same way, there are people who do not feel gender, in one way or another, who are called third Sex. There are people which its biological sex does not match their gender identity, who are transgender people, these people can start, if they wish, a sex reassignment by a combined process of psychological assistance, chemical and surgery, the transsexual people. There are also many transgender people do not want to do it completely or not at all, and just change their appearance. Transgender people may be the ones that most have made visible sexual diversity, so they have had the hardest life, and have suffered and are still suffering violence and murder. They deserve special recognition, support, and love. Fortunately, they are getting it every day a little more.

Sexual orientation is the sex that a person awakens desire and love. When a person likes the opposite sex is named heterosexual when a person likes people of the same sex is called homosexual and when people like either of the two sex is called bisexual. There are also people who are not sexually attracted to any sex, asexuals, and there are also people who are attracted to others without taking into account the sex, which is the pansexual people.  And also exist polyamory. For sexual orientation, all that has not been heterosexuality has been socially rejected for the last 2000 years. Need to talk about bisexual people who are still suffering misunderstanding, even from homosexuals, when it seems that the vast majority of people have a flexible sexual orientation, that is, that most people might be bisexual.

If we had to explain to an individual from another planet of human sexuality, we would say that is plastic because it changes over time, and we would say it is, therefore and also, diverse. We speak of male, female, intersex, men, women, mixed identities, transgender, heterosexuals, homosexuals, bisexuals, masculine person, feminine person, and androgynous people. In addition, we could also talk about people with a queer thought, which are those that go a step further and reject all of these categories to be social constructions, whose identity is under construction, is changeable, chosen without specific patterns and deconstructed. Simply engaged in living and having relationships, as indeed do the rest of the animal species.

Today, with this article we published the first illustrations that we will be extending over time. We thought it interesting to borrow the Russian matryoshka by the layers, by the subject of to look inside, out a woman, inside a man, etc., and also to piss off the Russians. Look inside me, look inside you. Look Inside.
Do not lose this grate vídeo by CARKI PRODUCTIONS (You can set English subs.)

Check out the whole Protest! Collection 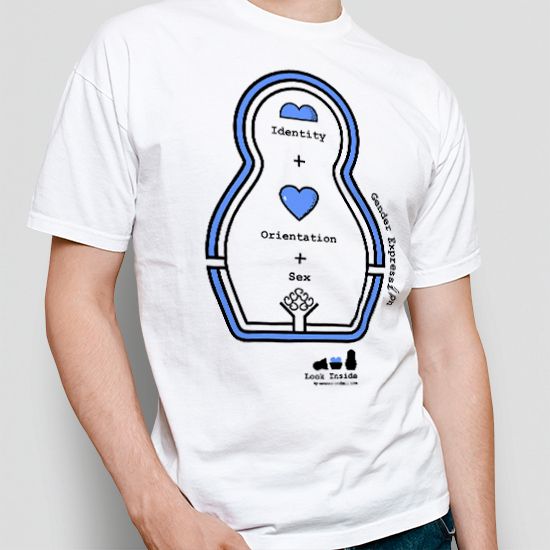 With this collection of Drawings & Stories, we want to show the great components of human sexuality and how these are combined in different ways giving rise to the sexual diversity that we see. The design of these pride clothing is based on the Russian matrioskas, where each layer shows related but different and interchangeable aspects. Sexuality, transgender, cisgender are some of the designs of this collection.