Green and red on white.

In civilized and democratic countries is not uncommon that gay, lesbian and transgender people were physically attacked, but in Italy, as we are told, the thing is worse, because once, some people have talked us about “finocchio hunts” in cruising places. No wonder that in Italy people could be afraid, and sexual diversity is less visible in the cradle of occidental faggness. Homosexual behavior has always existed, but was, in the West, Greeks and Italians, who integrated it in a culture that comes to us in many different forms to the present day, in which contrasts his extensive “gay history” with its high homophobia degree. 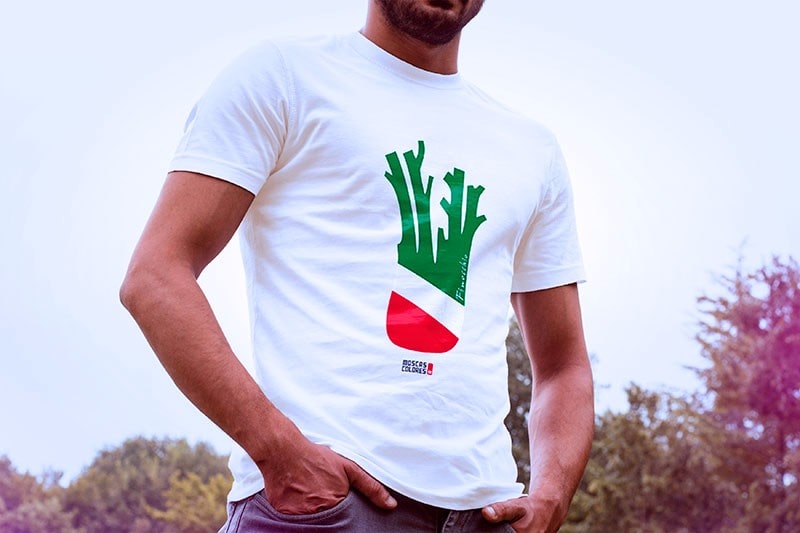 Finocchio (Flag) illustration, you can purchase it printed on t-shirts and many products.

Roman society inherited from Greeks the teacher-pupil homosexual system and turned it into the master-slave system, both within patriarchy where women were considered inferior, a consideration which was transferred to bottom men for being “like women.” Despite this,  for centuries existed homosexual relations, famous love stories between men and a particular subculture, which identified passive homosexuals with green color, used as a lure in cruising areas of cities.

This consideration of bottom behavior and permissiveness with top Roman citizens, in 533 a.d. had been transformed into a law condemning with castration and bonfire any homosexual behavior. How it went from one thing to another?  Several factors, but among the main ones are the following: changing morals of society by Christianity which reduced sex to reproduction; the use of homosexual behavior as a political weapon; extension of Stoicism which promulgated the repression of desires; the need for a reproductive policy to increase the empire and to palliated the effects of some epidemics, as well as recurrent foreign invasions.

The Catholic church and homosexuality.

With the rise of the Catholic Church throughout the centuries, and although the dome church was full of sodomites and gomorrahtes, always had some, as St. Augustine, determined to mess with homosexual behavior, so the Bible passages were adapted with each interpretation and translation. Thus, what had never concerned with god, became a mortal sin and a crime. In addition, the “bad” were always heretics and faggots, so any faggot was a heretic and any heretic was a faggot. The words “faggot” and “bugger” are a couple of expressions that the church has given to us as a product of heresy. One of the main tools was the Holy Papal Inquisition, which was in charge of organizing specialized groups with the sole purpose of monitoring and informing on finocchio in the districts of cities like Bologna and Perugia, in which there were 40 people, 8 per district, in charge of carrying the sodomites, to the courts.

Castration, bonfire and, according to legend, perfumed and cooked with fennel, a shrub that supposedly was closely linked to homosexuality in Italy, to the point that the word Finocchio (fennel) acquired the slang meaning of faggot, turning it into the most used word to insult and point gays in Italy. It is said that fennel was used to disguise the smell of burning flesh, in order to the public knows why are they burned too, and to make death slower. However, we now know that this is not true, and that fennel was never used in bonfires, but the juniper. The origin of the slang Finocchio has more to do with the little value assigned to this abundant species and with the negative characteristics associated with this lack of value socially embodied in a homosexual man. For more information see the entry Finocchio. Gay Dictionary (Italy).

The Renaissance and the illustrated tolerance.

With the advent of the Renaissance and the rediscovery of the classics, a period of “enlightened” tolerance was started. Although homosexual behavior was still pursued, this flourished in the private sphere of the houses of masters artists and their disciples, as were the cases of the famous finocchio Donatello, Botticelli and Leonardo da Vinci, and outside the art world, the Neoplatonic academies as the Roman or Florentine, having irregularly the approval of power.

The Enlightenment and repressive tolerance.

Over the years continued to pursue homosexual behavior to a greater or lesser extent, and with the advent of the Enlightenment, began the first debates on decriminalization. Gradually the death sentence for sodomy was disappearing from the sentences and took hold the Repressive Tolerance model that reaches today. The legislative changes in favor and against homosexual behavior were happening until 1889 when the new Italian Unified Criminal Code no longer included it as a crime.

According to some historians this model of Repressive Tolerance appears by the tacit agreement between a state (that prefers not to legislate against homosexuality to not promote it, leaving the task of “social control” in the field of sexual repression in the hands of the Catholic Church) and the Italian society, who believed for generations that repression would be deployed only in response to an attempt to create an “alternative lifestyle.” So a climate in that homosexuality did not exist officially was generated, and was forbidden to speak of it even to condemn, a situation that continues until today. Repressive Tolerance is probably the differentiating factor that explains the current Italian homophobia and may provide the key for its solution.

In the late 19th and early 20th century, Italy became a heaven for European and American gay intellectuals, such as the case of Oscar Wilde and Foster. Youth men from all Italian cities supplement their income in exchange for sex with tourists in search of the famous Italian man bisexuality. The Italian society tolerates this behavior whenever it was hidden as shameful and not made public, for this reason, this legislative freedom did not translate into consciousness or homosexual identity, but developed a subculture, private and encoded. Although the green color was still used, the use of red color began to extend for the recognition among homosexuals.

With the arrival of Mussolini, increased pressure on homosexuals with the laws against asocial and public scandal, allowing cleaning measures for those who endanger the public morals and good customs. The editor of the magazine Rassegna di studi sessuali, regarded as the first hint of homosexual movement in Italy, was considered dangerous socialist and bottom pederast and ended up being imprisoned. The police, discreet in his actions, performed raids on gay meeting places. Those affected suffered beatings, arrests, confiscation of personal property, house searches, surveillance and all forms of harassment. The court convicted could be deported, from 1 to 5 years to colonies of punishment in the mountains or in some Italian islands such as Ustica and Favignana, which were dissolved before the arrival of U.S. troops. After World War II the Repressive Tolerance model and homophobia continued in Italy, where people did not talk about homosexuality except for a few public scandals like the “balletti verdi” in 1960. In 1971 was created the first LGBTI Italian organization called FUORI (Italian Homosexual Revolutionary Unit Front, an acronym that also means “out” or “Come out!). In 1985 Arcigay organization was constituted, and in the late nineties, Gaylib, Antagonism Gay, and the lesbian Fuoricampo were founded. In 2000 was held in Rome for the first time, the Word Pride, before an irate church, an act that could symbolize the break with the “do what you want, but that goes unnoticed.”

Today the panorama of homosexuality in Italy is more than worrying, homophobia and Repressive Tolerance is still present in Italian society, which still refuses to talk about sexual diversity normally outside activism or politics. Homosexuals are no longer burning with fennel but were assaulted and in some cases, they are killed before the impassivity of the authorities or were harassed and depressed until suicide. Italy leads all bad statistics and negative scores on sexual diversity and refuses to pass legislation to try to reduce homophobia and to extend the rights and freedoms of LGBTI groups. That hypocritical system of “do what you want, but that goes unnoticed,” feeds the degree of homophobia to exaggerated limits, in a European country like Italy to which European authorities, not required, once and for all, to guarantee the safety of LGBTI people and respect for human rights. Italy, a country that should speak much more of sexual diversity, because it is an issue of great importance for their lives and because it is a green and red, and finocchio country, as the others.

Do you enjoy Finocchio? check out the whole Protest! Collection. 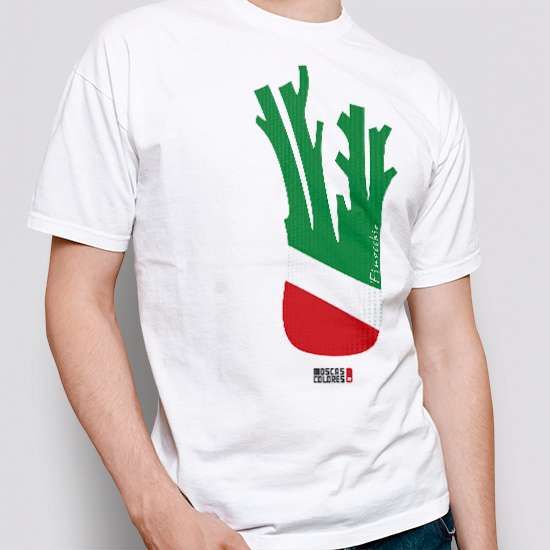 Italy could seem a bastion of heterosexuality for its homophobia, Oh, the Italian macho! However, it is quite the opposite since Italy was the western cradle of “faggness”. The Drawing & Story of this pride clothing is a fennel silhouette painted with the colors of the Italian flag, which curiously were the key colors for the cruising in the times without freedom.