How to say lesbian

The Lesbian Dictionary is composed of 23 dictionaries corresponding to each of the compiled languages, with more than 350 terms and expressions that speak of sex and love between women, and that sometimes also speak of bisexual women and transgender people. 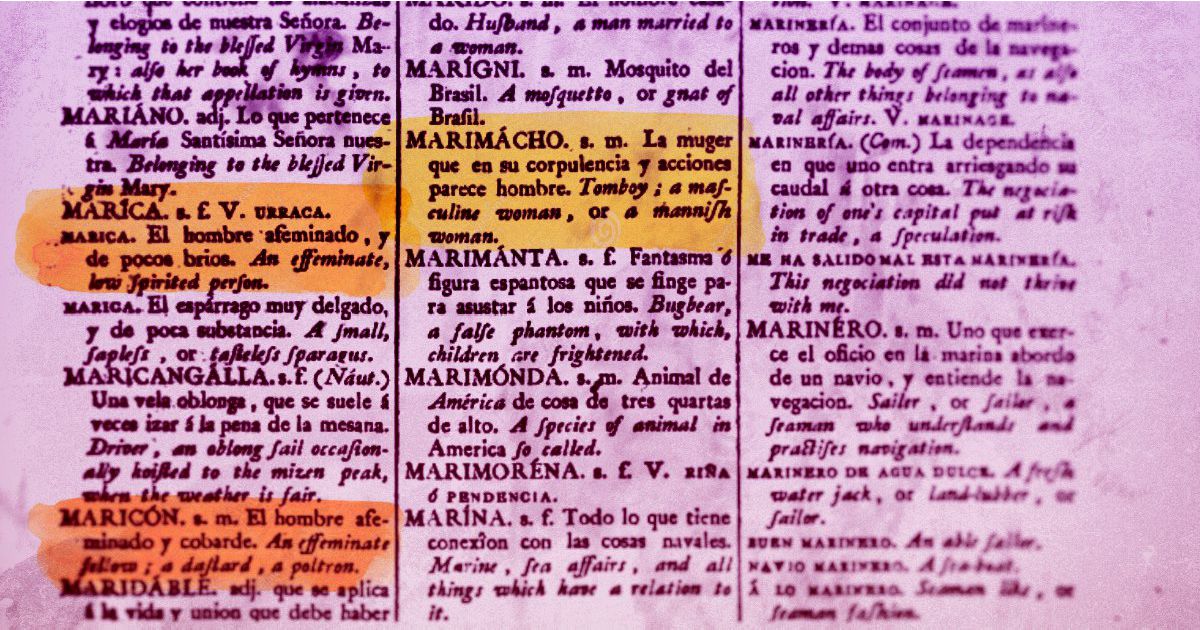 Marimacho is a word that we explain in the Lesbian Dictionary

The making of the Lesbian Dictionary

Our dictionaries are not a mere collection of words compiled without rhyme or reason in the network and in printed texts. On the contrary, they are contrasted and subjected to debate on their use, meaning, and origin. In some dictionaries, this turns out to be easier than in others, due to the language and culture itself. In others, though, the task is almost impossible. However, the most remarkable feature of the lesbian dictionary is the least amount of words and expressions in relation to the gay dictionary. This is linked to the social conception of women’s sexuality in the past, which was only procreative. This caused lesbians to be invisible in the eyes of society. So much so that, as a general rule, the first laws against homosexual behavior that were passed in its day, did not include lesbian sex, which also happened in the bible.

Objective of the lesbian dictionary

Because our aim with the gay and lesbian dictionary is not to make a collection of words, but to show that what we understand and think about the manifestations of sexual diversity is nothing more than a social construction, relative to a space-time period, which speaks of a human characteristic that is sexual diversity, the only thing that does not change. What is considered bad today was once normal, and viceversa, and it is about this reductionist process of women sexual potentiality, among other things, that words speak to us.

The variety of the lesbian dictionary

Some dictionaries, such as the Spanish, English or Italian ones are more extensive than others such as the Russian or Vietnamese. This is due to two reasons, on the one hand, our cultural closeness and on the other the ability and possibility of each culture to study and record their expressions in texts.

Use of lesbian dictionary

We start our lesbian dictionary, as is natural, with the word lesbian. Select any language on the side menu to learn more words.

It is the most universal way to name homosexual women, that is, women who show an inclination towards the erotic and emotional relationship with individuals of the same sex. The word has its origin in the name of the Greek island of Lesbos, where the poet Sappho lived in the 5th century BC. Her literature focuses on the beauty of women and the proclamation of her love for them. Derived from the poet's name are the terms sapphic and saphism, also synonyms of lesbian and lesbianism. Until the end of s.19, the word lesbian was used to name anything that came from the island of Lesbos, like Lesbian wine. It was from its use in a medical dictionary to define the tribadism, a sexual practice consisting of rubbing female genitalia with the genitalia of another woman, that the use of the word lesbian became widespread, first as a mental illness, and later, in the 20th century, as a positive term.

Unlike the word "gay", which is used without translation in many languages, the term "lesbian" does have translations, preserving in most languages the root "lesb" as in the case of: Lebbe (Danish), Lesba (Polish), Lesbian (English), Lésbica (Portuguese) or Lezbejka (Serbian).

Since the very emergence of homophobia to the choice of the word "lesbian" as a positive term in the 20th century, all of the words used were pejorative expressions , which we can group in the following categories:

2) On vice and prostitution: as are the french terms "gousse" and "gouine", currently meaning dyke, but that initially meant prostitute, since lesbian relationships were understood as sexual activity made by prostitutes. We can also talk of the German term "jubelhure" which literally means party whore.

4) Euphemisms: including animal names, as "lepakko" (bat in Finnish) or “dragoner” (dragon in German); fruit names, as “ô môi” from vietnamese language (a fruit of the area) or “lemon” from australian English; and finally, object names as "onabe" and "pot" (pot in Japanese and Dutch respectively).

5) The concept of Crooked: the concept of crooked, devious, spoiled or defective is present in many languages, and has a special importance because of its relationship with the term “queer” that was agreed to refer, without rating, to any form of sexuality, idea that comes from revolutionary theory known as Queer Theory. In addition to the word “queer”, with the same concept, we have the Spanish term “tortillera”, that comes from “torta” (crooked) and “torcido” (twisted), and “obratna” in Bulgarian.

Can you help us with the Lesbian Dictionary?

Everything we post on this blog is opinion articles, but we've classified them into these categories to highlight the relevant topic. What interests you the most?
42 original and fun designs to buy printed on t-shirts and other items. Claim each day or treat someone special with one of our Drawings & Histories. Which one do you like the most?
More than 2,200 entries in 68 languages make up the largest LGBT + dictionary on the web, with a glossary of sexuality terms explained for you to understand. Do not leave with doubt!
Lemon. Lesbian Dictionary (Australia). Pedicabo ego vos et irrumabo. Moscow 2112. Brief history of Russian homosexuality. Tortillera. Lesbian Dictionary (Spain).
△
Mdc
MOSCAS DE COLORES
Contact · About us · FAQ · Cookies policy
Copyright © 2012–2022 @moscasdecolores · See you soon!
In order to provide you with the best online experience, this website uses cookies. By continuing to navigate, we understand that you accept its use.Ok