The trucha and the trucho.

The Spanish word Trucha, translated to the English language as Trout, besides the name of the fish, is a slang term with a large variety of meanings depending on the time and place to consider. This is why trying to find out the origin of Trucha as a slang term for homosexual man, faggot, etc., is tremendously complicated and slippery, as is the fish, especially in this case, where several explanations seem reasonable. Even compared to other slang expressions, as we do many times, the result is not conclusive. 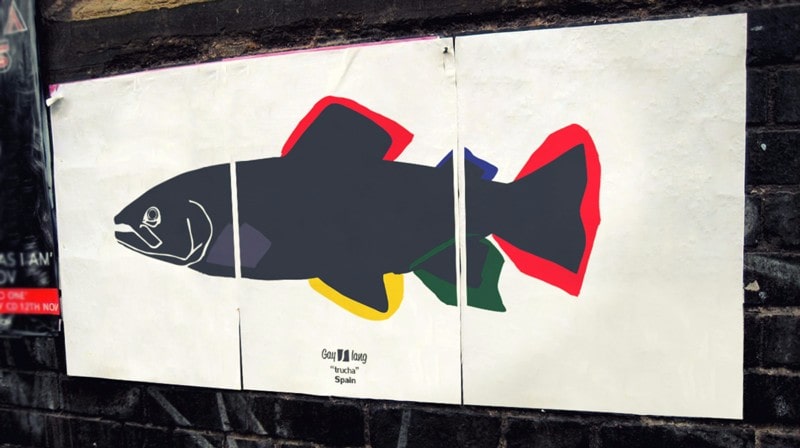 Trucha illustration, you can purchase it printed on t-shirts and many products.

The impression we get is that it is a fairly recent slang word, and the most “academic” explanation we have found is a publication of the Cervantes Institute in which it is commented that this expression has become popular with its appearance in 2013, in episode number 6 of the first season of the Spanish television series “Los Serrano”. In here, in the grouchy character Santiago comments, overwhelmed, that his great friend from the military service, Pepe, “¡se ha hecho gai, trucha, trucha perdido!” (has become gay, trout, utter trout!.)

This slang form for a homosexual man is not included in the dictionary of the RAE (Royal Academy of the Spanish Language) or in the “Diccionario de expresiones malsonantes” by Jaime Martín (1974) (Dictionary of rude expressions by Jaime Martín), neither in the Dictionary of Spanish slang by Víctor León (1980) nor in the McGraw- Hill Slang Dictionary of (2001). This does not necessarily imply that the term was not used in those years, but it marks the time horizon in which the slang term may have been initiated or popularized. All the references from these last years are related to the television series, which would reinforce the idea that homosexual trucha appeared at the end of the 20th century. Even so, and not satisfied with this result, we have gone back in time and learned some interesting things.

Although in all the older dictionaries we have consulted the meanings of trucha are always the same, a fish, we have found the use of the word trucha as slang for “young and fine” prostitute in the literature of the Spanish 17th century, as opposed to abadejo (cod-like fish) as slang for “old and ugly” prostitute. The relationship between the prostitution of women and male homosexuality is found in many slang words for homosexual men, such as the word gay and the word puto, so this could be one of the possible origins, but also one of the least likely since we have not been able to find written references before the 20th century, and with so many years in between, there should have been some.

Diving through the newspaper archives we have found a paragraph that draws our attention, to say the least. It is the one that speaks about Práxedes Mariano Mateo Sagasta and Escolar (1825-1903), who was the president of the government of Spain on several occasions and founder of the Liberal Party. We found a reference (dated January 13, 1883) to a publication of the newspaper “El Globo” (Madrid, 1875 – 1932) in “El Siglo Futuro” (another newspaper) which says the following about “An unknown fish”:

“Mr. Sagasta cannot be either, because he is trucha, or at least he was in his prime, and it is not possible that he has changed sex, even though he has changed his condition.”

This fragment, probably taken out of context because it is likely to talk about politics, could have a double meaning since the press of the time did not mince their words, unlike what’s happening now in Spain, where we limit our freedom of expression. Considering that Mr. Sagasta was married at the age of 60 and had a son and a daughter, and that “effeminacy” was used as a political weapon against the adversary, could this trucha be the slang of a homosexual man? It is difficult to know.

However, one of the slang meanings of the word trucha at that time was related with being a clever, shrewd person, etc., which could actually be the meaning used for Sagasta, as used by Miguel de Unamuno (1864 – 1936) in one of his works, where he claims that “… it is necessary for life to be a bit trucha and to distrust anyone who …” . This meaning does appear in the dictionary of the RAE , deriving the word from the Hispanic Arabic word Truchiman, which we have also found in different dictionaries of that time and that would coincide with the current meaning of the slang in Mexico and in other parts of Central America, such as the name of the Salvatrucha gang.

In Argentina and Uruguay, trucha means a false or fraudulent thing, and this is related to the expression “entruchada” that we have found in some old Spanish dictionaries with the meaning of “thing made by confabulation of some, made with trickery or malice”. This meaning, although coming from “truco” (trick), could be the origin of the meaning of the slang term, by understanding that a trucha man is a false man, a man who is not really a man, or who is not at all, social consideration that homosexual men have traditionally had.

This explanation of the word trout would imply that this slang word traveled from Argentina and Uruguay to Spain. The flow of Argentine migrants to Spain occurred from 1970 to 2008 and its peak occurred during the years of the Argentine economic crisis, between 2002 and 2008. This coincided with the broadcasting of the episode of the television series “Los Serrano “, but this would imply that it came to Spain with the meaning of false and that it quickly began to be used to point out homosexual men only by Spaniards. We can not rule this explanation out completely, although it seems highly unlikely because these transformations take time.

One of the most frequent sources of slang words is the patriarchal identification that consists of, without going in depth, attributing (supposedly) feminine characteristics to gays and (supposedly) masculine ones to lesbians. Examples of this are insults as frequent as marica, mariquita, and maricón (fag, sissy and faggot). The argument is yokel and simple: if he likes men, he is like a woman, and therefore I name him like a woman.

Thus we arrive to the common dichotomy “courteously” expressed by the question: ¿te gusta la carne o el pescado? that translated into the English language is Do you like flesh or fish? Which has a similar meaning to the English expression: Do you like snails or oysters? that is, do you like men or women? Here, the flesh is the man and the woman is the fish. Apparently, the relationship of women with fish comes, of course, from the hand of machismo, which establishes a relationship between the scent of the vagina and the smell of fish (as if the dirty cock smelled like roses). Sample of this is the English word fishy that derives from fish, which is a term used to describe a drag queen with an extremely feminine appearance or who really looks like a woman. Although the term is considered a compliment between drag queens, it is often considered an insult among women who are not drag. Easy to understand, isn’t it?

So one of the possible origins of our trucha slang term could lay in relating homosexual men to women by the name of a fish. This is the theory exposed by Felix Rodriguez in his Gay – Lesbian Dictionary (2008). However, this would imply the jump from the word fish to the word trucha. But, Why trucha and not eel, the anchovy or sea bass?

¿Me quieres mucho? Como la trucha al trucho. (Do you love me much? Like the female trout to the male trout. This Spanish idiom, whose first reference dates from 1878 and yet it has reached our days, could be behind the origin of the trucha slang, although it is just guesswork. As in the previous case, we would also be facing a patriarchal identification, in which, being the trucha the woman and the man the trucho, calling a homosexual man trucha would be calling him a woman. “Yes, of course, you say they love each other like the trucha to the trucho, but …  of the two, Which of them is the trucha?”

In the first version of this article, from 2012, we were quite sure that the origin of the slang term was in the fact that the trucha is a fish that swims against the flow. Even Arturo Pérez-Reverte said so in an article in which he spoke of Miguel de Molina (2014), but with time we have realized that it is not so, since the slang words for homosexual men are usually insults, and swimming against the flow can be considered a praise and a strength.

Another conjecture comes from the etymology of the word, since in its Latin and Greek origin, trucha literally meant “female swallower” and it can not be  ruled out that at some point, after a Latin class in high school, it could have began to be used to name to homosexual men because of the swallowing or sucking and because of the implicit feminization.

Another explanation could be found in the rainbow trout, a species that began to be introduced in Spain at the end of the 19th century and experienced an increase between 1973 and 1983 because of its introduction by the government. This coincided with a period in which the visibility in Spain of the LGBT community began. Maybe someone established a relationship between the rainbow flag, the LGBT symbol, and this trout species, giving rise to the slang term. Although it is a mere conjecture it makes sense if we consider the date in which the slang became popular.

Check our Spanish Gay Dictionary to learn more interesting words and stories or our blog to learn new points of view about human sexual diversity and relevant scientific information. 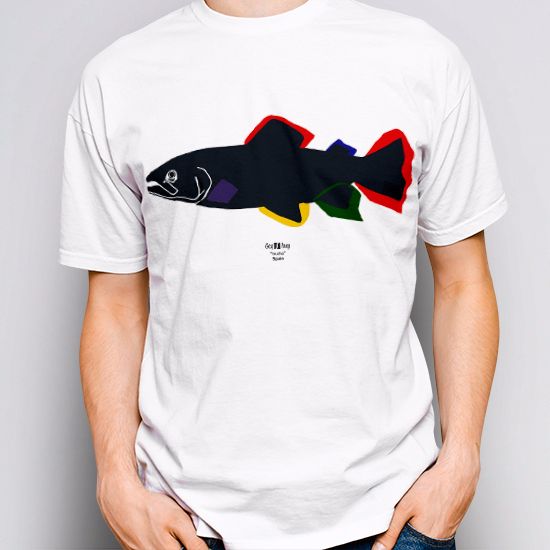 Trucha was our first Drawing & Story, back in 2012, and there were 3 different versions initially. Besides this one, we had the punk trucha and the dotted trucha, versions that you can still find at some online stores. This design, which we call Trout zones, is the classic vectorial design that we used to do at the beginning, and in which the word was not the focus of the illustration. If you like it and want to purchase it, keep in mind that you must use a clear background. Treat yourself or surprise some special person with Trucha and its story.